A couple of matters caught my attention this morning, from the world of journalism and coffee shops. 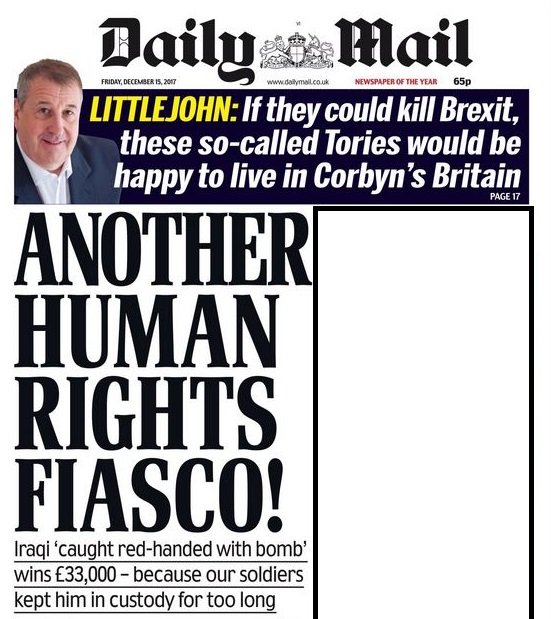 The Daily Mail wants us to believe that an Iraqi bomber has been awarded £33,000 in damages for being unlawfully detained.

In fact, as we can see from the judgment, the damages for unlawful imprisonment amounted to just 10% of that figure – at the rate of £100 per day.

I wonder how the editor of the Daily Mail would feel if he, or someone close to him, were held unlawfully and received £100 per day in compensation.

The other £30,000 was for matters which most of us would consider to be torture.

A Swedish coffee shop has launched in London under the not-very-Swedish sounding name of Wayne’s coffee. Their first branch is around the corner from me.

A substantial banner announced that, as part of their opening celebarations, there would be “50% of hot drinks”. Knowing how easily a typo can be missed when there are other things to worry about (50% off hot drinks, presumably?), I went in this morning and ordered my drink.

“I’m sorry”, the barista said, “our machine is broken. Would you like a cup of tea instead?”

So, not a typo after all. They really are serving only 50% of hot drinks today. But why advertise the fact?

[Update 1: The Daily Mail has subsequently published not one correction but two – presumably because the first correction was deemed not to go far enough – acknowledging that the portion of the damages relating to unlawful imprisonment was £3,300 and also that the claimant was not, in fact, involved in bomb-making.

Update 2: Wayne’s coffee tweeted an invitation to me to return to their coffee shop for a free drink and a piece of cake, both of which were delicious.]

This website uses cookies to improve your experience while you navigate through the website. Out of these, the cookies that are categorized as necessary are stored on your browser as they are essential for the working of basic functionalities of the website. We also use third-party cookies that help us analyze and understand how you use this website. These cookies will be stored in your browser only with your consent. You also have the option to opt-out of these cookies. But opting out of some of these cookies may affect your browsing experience.
NecessaryAlways Enabled

Any cookies that may not be particularly necessary for the website to function and is used specifically to collect user personal data via analytics, ads, other embedded contents are termed as non-necessary cookies. It is mandatory to procure user consent prior to running these cookies on your website.